Vegetable tagines are very popular all over Morocco, and is an extremely versatile dish. Create your own favourite tagine with all the suggestions in this post and recipe card.

🧾 A deeper dive into this recipe

I have eaten so many vegetable tagines during my Moroccan travels, and they were always different. Depending on location, locale produce, and time of the year. It is a very common and popular dish, especially in the mountains with the Berber communities. It is such a versatile dish, you can pretty much create it according your own personal likings.

So, let's have a look at my recipe. I have used vegetables which are easy to get here in the South of France, but also very often used in Morocco. Such as, carrot, turnip, potato and courgette. I used onions and tomato as my base ingredients to layer on the bottom of the tagine, this is in general a very common practice.

Furthermore I have chosen to use Chermoula in this recipe (what is Chermoula? > see below), because for me the use of chermoula gives so much extra depth and flavour to the tagine. But chermoula is definitely not a 'must have' ingredient in a vegetable tagine. Most often it is not used.

As a bit of a sweetener I have used a good handful of raisins. I stuffed some mint sprigs in the middle of the tagine, such that during the cooking process these lovely aromas slowly travel through the whole tagine and infuse the vegetables.

I am very pleased with this particular recipe creation. The pure vegetable flavours are still very present (use the freshest ingredients possible). While the chermoula gives it a spiced and herby layer of flavours. The tomato provides the juiciness, and the raisins are softened and balance the spices. So easy and so delicious!

A great dish to enjoy with friends. You can prepare the tagine ahead, and leave it to simmer while hosting your friends. Followed by the great experience of having one large tagine in the middle of the table, and all tuck in with some home-made khobz.

Chermoula (or Charmoula) is a marinade mixture made of spices, and herbs. Such as; Garlic, cumin, coriander, turmeric, saffron, paprika, black pepper, fresh coriander, parsley, lemon juice and olive oil. This marinade is most often used as a marinade for fish, or fish tagine. But it work beautifully as well with vegetables.

Even though it is probably safer to use a fixed recipe the first times you make your own tagine. Once you understand the cooking process, and the use of flavours you can easily become your own tagine recipe developer, and create your signature tagine. Use ingredients such as;

It's all about getting the balance between the flavours just right. As you can see the possibilities are endless, you can pretty much use whatever you like. But at the same time I do want to acknowledge that the best tagines I have tasted were the most simple ones with only very few ingredients, but of extreme freshness and quality. So go as much as possible for top seasonal, local produce.

I hope I have motivated you in making your own tagines. If you don't have a clay tagine pot, you can use a cask iron pot instead. But it is definitely worthwhile to hunt for a proper clay tagine pot, it does make a huge difference in texture and flavour distribution. They don't have to cost much.

I often see non-Moroccan cultures eating tagine with couscous, but traditionally these dishes are never mixed in Morocco. All though in general I am all for mixing & matching different cultural foods, but in this case the mix doesn't agree with me.

But of course feel free to do what ever you want to do, and make sure you enjoy it! 🙂

Some other Moroccan recipes on this site;

This vegetable tagine recipe is part of my 'Travels of taste' series. Using our taste buds to travel the world, discover other cultures through food. So today we find ourselves in Morocco. If you are ready to imagine yourself walking around in the hustle & bustle of the souks, and indulge in all its flavours. Check out my full Moroccan 'travels of taste' post; >>> Morocco - the flavours of the souks.

I would love to see your tagine creations, please add @haricoco1 to your instagram posts, so we can share our experiences. 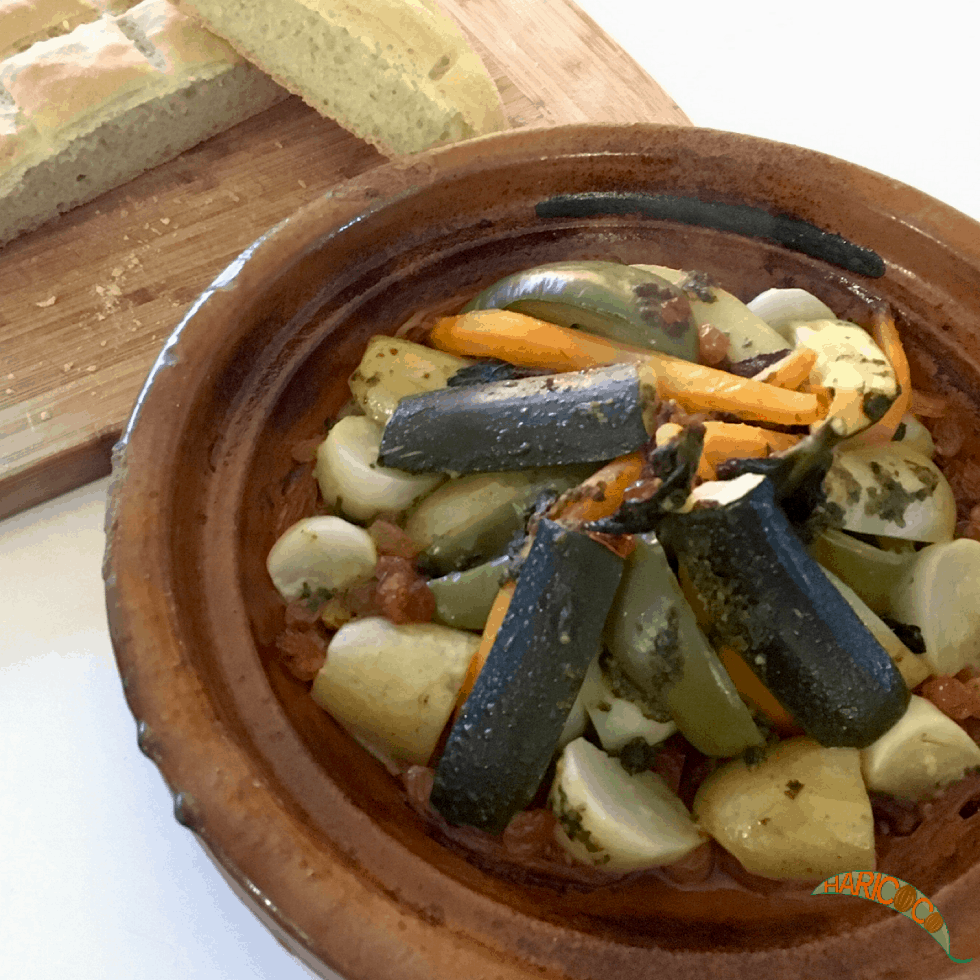 To make the Chermoula;

A vegetable tagine is very versatile, and you can pretty much use any vegetables you like. Likewise for the herbs, you can add extra coriander on top of the tagine, or add some olives 20 minutes before ready. The options are endless. The Chermoula can be adjusted as well to taste. In this recipe I don't use harissa or cayenne pepper, but you can easily add those of you like your tagine nice and spicy. I like my tagine always served with Khobz. (Moroccan bread)

Living on the Mediterranean and Passionate about plant based cooking with local and seasonal produce, home brewing and wine pairing. Living the good life, while keeping the planet in mind! >> find out more...

Living on the Mediterranean and Passionate about plant based cooking with local and seasonal produce, home brewing and wine pairing. Living the good life, while keeping the planet in mind! >> find out more...

This website uses cookies to improve your experience while you navigate through the website. Out of these cookies, the cookies that are categorized as necessary are stored on your browser as they are essential for the working of basic functionalities of the website. We also use third-party cookies that help us analyze and understand how you use this website. These cookies will be stored in your browser only with your consent. You also have the option to opt-out of these cookies. But opting out of some of these cookies may have an effect on your browsing experience.
Necessary Always Enabled
Necessary cookies are absolutely essential for the website to function properly. This category only includes cookies that ensures basic functionalities and security features of the website. These cookies do not store any personal information.
Non-necessary
Any cookies that may not be particularly necessary for the website to function and is used specifically to collect user personal data via analytics, ads, other embedded contents are termed as non-necessary cookies. It is mandatory to procure user consent prior to running these cookies on your website.
SAVE & ACCEPT