The Mediterranean, which I call my home and is a foodie’s paradise. The abundance of a large variety of fresh locally grown produce is immense. I never get enough of its sun, its colours and of course the fresh & pure flavours of the Mediterranean cuisine.

The Mediterranean is a sea, and with the Mediterranean region I mean all countries in the Mediterranean basin. In other words, the southern European countries, North Africa, and the Levant region. This is a very large area to make a food related post about. But they do share a common climate, and there fore common ingredients like Olive oil, garlic, wheat and wine.

A bit of history on Mediterranean food

The “trinity” of basic ingredients of traditional Mediterranean diet are; Olive, wheat and grapes.

The olive appears to come from the region of Persia and Mesopotamia, at least 6,000 years ago. Quickly spreading to nearby areas, and cultivated since approx. 3000 BC in southern Turkey, the Levant, and Crete. Nowadays the Mediterranean produces 95% of worlds olive production. Also it accounts for the world’s highest consumption of olive oil. For example in 2014 in Greece they enjoyed 17kg/per person, in comparison to 1kg/per person in the United states.

Wheat was cultivated about 10.000 years ago in the Levant region. It reached Spain 5000 BC. Wheat is a staple food in the Mediterranean basin. For instance, wheat bread was critically important to the Roman empire. Also pasta, semolina products like couscous and bulgar are considered staple foods.

The grape was domesticated between 7,000 and 4,000 BC between the Black Sea and Persia. It seems that wine was made there from 6000 BC. Later it travelled to Greece and Crete around 5000 BC. Reaching Spain around 1000 BC. Grapes are mostly grown for making wine and vinegar as basic components of the Mediterranean diet. However drying as raisins and eating as table grapes is also common practice. Nowadays Southern Europe’s wine production is about 1/3 of the worlds production.

In the period of Al-Andaluz the Arabs brought many ingredients to Portugal, Spain and Sicily. Such as; Aubergines, citrus, spinach, cane sugar and apricots. Later Columbus brought the arrival of foods from the Americas, like; Potato, bell peppers and tomatoes. Especially the tomatoes became a large and important part of Mediterranean cuisine.

As mentioned before the Mediterranean is a large region. There fore I briefly want to have a quick look into the various cooking styles or specifics.

You can divide Mediterranean cuisine into eight different styles. Even though many cooking cultures overlap one another.

Maghrebi cuisine includes the cuisines of Algeria, Libya, Morocco, and Tunisia. Dishes are often very colourful and well spiced with for example Ras-al-hanout. Also harissa, a hot spice mixture is a favourite ingredient. Famous dishes are; Couscous and Tajine*.

*I have dedicated a separate post on Moroccan food (as I am a tajine & couscous lover). So you can find delicious couscous and tajine recipes there.

Within the Egyptian cooking culture they have claimed the famous falafel as their original recipe. But was quickly widespread all over the Levant region. In general they use lots of herbs, nuts and spices. Interestingly their national dish is a mixture of Italian, Indian, and middle eastern cuisine. Called the Kushari, and contains; rice, lentils and pasta.

In recent years the Levantine cuisine has travelled across the globe. Mostly known for its Mezze. Which include famous dishes like the tabbouleh, hummus, olives, baba ganoush and tahini and many more. A great way of enjoying food together with family & friends.

Ottoman cuisine includes the cuisines of Turkey, Balkan and Cyprus. I think the most significant ingredient of this food culture is the Börek; A very thin layered unleavened dough commonly known as Filo (or Phyllo). Filled with various fillings, such as; feta and herbs, onions and meat, spinach, courgettes, or green peas. Made in different shapes, like; a large pie shape, cigar shape, triangles or little squares. Moussaka is also a popular and widespread dish from this region.

The Greek cuisine is actually part of the Ottoman cuisine. But I do want to mention it separate here as many of the popular Greek dishes and ingredients pre-date the Ottoman (even to ancient Greece). Like the lentil and Giant white bean soups. The pickled fish dishes, and the bottarga (salted and cured fish roe) dates back to the Byzantine era.

Mediterranean Italian cuisine includes most of Italy’s cuisine except for the Northern cuisine (the Alps). Most people are very familiar with the Italian cuisine as it travelled across the globe. Risotto, spaghetti and pizza are very popular worldwide. What I personally like about the Italian cuisine is the minimalism in its dishes, but only with the use of high quality produce. In Italy you will often find the best spaghetti’s with only garlic and olive oil. No cheese, no heavy sauces, just fresh beautiful products.

*In the near future a separate post will be dedicated only to Italian cuisine.

Spain has a large coastal line and there fore a very varied Mediterranean cuisine. From Catalonia to Andalusia. Catalonia shares much of its cuisine with neighbouring French Roussillon. Valencia is known as the origin of the Spanish national dish the Paella, and the abundance of citrus fruits. While Andalusia is famous for Ajo blanco, and gazpacho which originates from the Al-Andaluz era.

Personally I am in love with Mediterranean food recipes. From the Maghrebi to Ottoman or Spanish cuisine. It is the produce that makes the difference. Because of the Mediterranean climate vegetables, fruit trees, and herbs grow well here. Mediterranean food is from origin a very plant based orientated cuisine. Only in recent decennia, because of modern fast lifestyles people tend to eat more meat and processed foods than former generations, unfortunately. But going back to its origins makes it very easy to veganise Mediterranean dishes. Here my favourites;

My favourite cold soup also known as white gazpacho. It is actually the original gazpacho of Spain, it existed way before the tomato gazpacho we all know.

is a purée consisting of tomato and bread, originating from Cordoba in Andalucia, south Spain. It is made from tomatoes, bread, oil and garlic.

So many recipes exists and claim to be the authentic one. So I am not going to do that. What I will do, is tell you which features a good ratatouille should have. To give it it’s true French Mediterranean flavours and feel.

A refreshing summer salad, this raw courgette & avocado salad. Very quick and easy to make, and very easy to adjust to your own liking

Originates from the Levant region. Traditionally made with bulgur wheat, but some people use semolina instead. It is most often used as part of a mezze, in which multiple small dishes are shared and enjoyed together.

This salad is so easy, and quick to make. It is a great little dish to have ready in your fridge. You can add it as a side to your Mediterranean style dishes. Or just enjoy it as a little tapas with some rustic bread.

The North Mediterranean cuisine is known for using the pure flavours of the produce, rather than using lots of spices or over-powering herbs. Adding olive oil, vinaigrette, and basil gives it that ‘Med’ feel.

I love baked falafel all year around. In the summer I often enjoy it with a salad. But during the winter time I really don’t feel like eating salads, so I add wintery veggies.

Stuffing peppers has been done for many centuries. Bell peppers are a very versatile vegetable, in other words, they go with almost everything. Great to use with leftovers.

I love making and eating this vegan spanakopita. It really brings those Greek flavours onto your palate.

Spain’s national dish veganised. Vegetable paella’s are more common then you might think. In the past when meat & fish was scarce many paella’s de verduras have been made.

For those who think that you have to miss out on a delicious moussaka if you skip animal protein. Well, here the answer to that. An amazingly rich and creamy vegan moussaka.

They bring you directly to the Mediterranean coastline. The lovely soft texture from the braised aubergines, together with the acidity from the toppings, and the caramelised sugar and balsamic vinegar. yummy!

Still insufficient evidence to really determine a precise location to the origin of hummus. We know it has been eaten over centuries in the Levant region. With only 4 base ingredients.

From origin French, but this vegan aioli is made with the usage of aquafaba. Aquafaba which is the liquid from chickpeas, is a beautiful product to make very smooth and creamy sauces with.

What to drink with Mediterranean dishes

This recipe post is about a large geographical region. With a huge variation of dishes, this makes it very hard to speak about one certain wine-style. So, in most recipe’s I included a specific wine suggestion. But as we are talking about the Mediterranean we shouldn’t be short on wine options 😉

I hope that with the help of these recipes you can create that Mediterranean feel in your own home. Imagine those blue skies, and feel that sun on your skin, while indulging in these delicious dishes. Enjoy! x Nicole 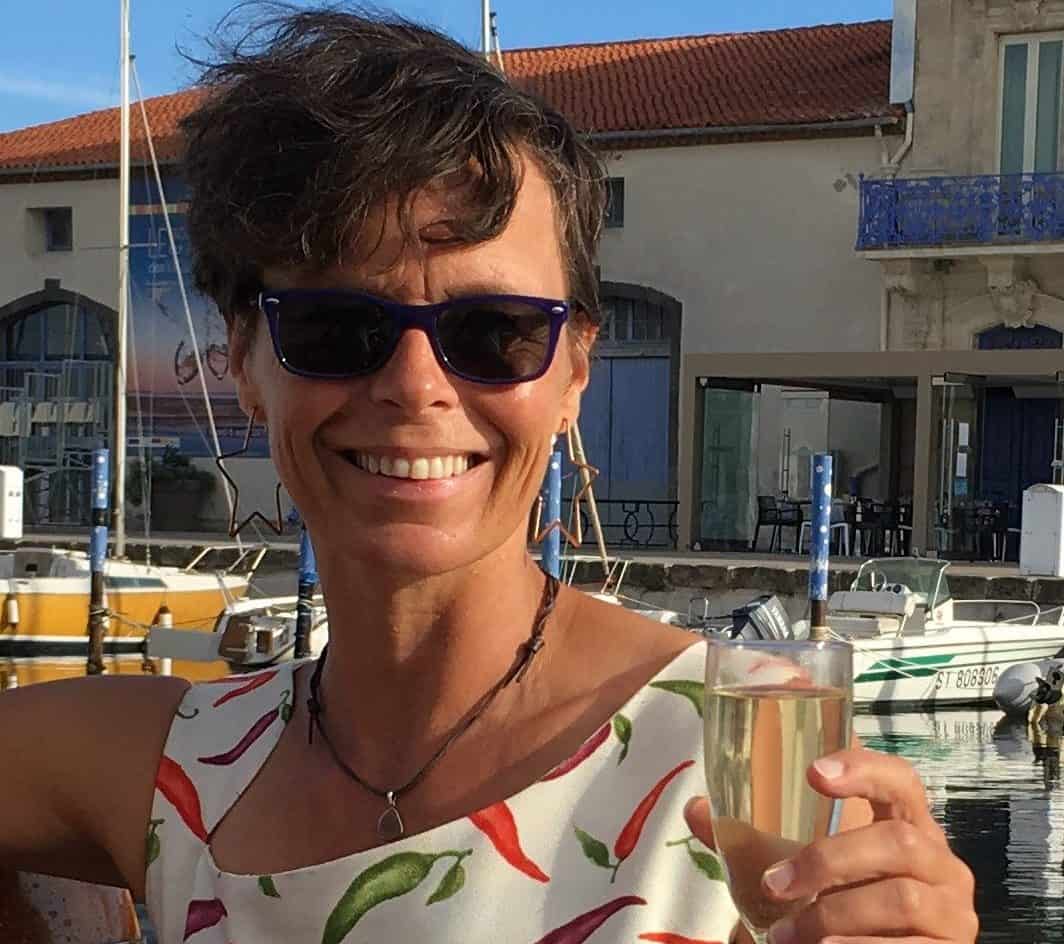 Nicole Schoofs is the founder of Haricoco. She believes in good food & good living, while keeping our planet in mind! Click image to read more...